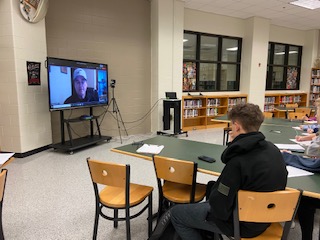 “Down to the baseline… Mitchell races into front court… such great movement by Mitchell. Oh, wow! Exploded down the baseline… and the fans are still going, my, oh my, in New York!”

The crowd roars inside the arena, and for those watching at home, it is the job of the play-by-play announcer to bring that excitement into viewers’ living rooms.

Craig Bolerjack, an American sports broadcaster, has spent decades working for local and national television networks and as a play-by-play announcer for sporting events including professional and NCAA basketball, football, and even the Olympic Games. Bolerjack has been the voice of the NBA’s Utah Jazz since 2005.

Sports have always been a part of his life. In high school, Bolerjack was an athlete. He played football and ran track.

“I was recruited [for football] … I chose K-State [Kansas],” Bolerjack said.

College football ended abruptly for Bolerjack when he suffered a career-ending injury. This left him wondering what to do with his life. Bolerjack knew his love for sports was strong and thought he may want to have a career in something sports-related.

“I had a friend of my brother’s who said, ‘Try an elective course of sports production 101,’” Bolerjack said.

It was a random journalism class that launched him into a new career. He enrolled in a radio broadcasting class and never looked back. “The lights went on” and Bolerjack realized that he wanted to be a broadcaster.

Bolerjack started out as a biology major, then considered a career in teaching, so he could coach. Once he was on the college radio station doing sports reporting, he knew he had found his calling.

“You never know what direction life’s journey will take you,” Bolerjack said.

As he nears a record 1500 NBA career games, Bolerjack says although he never planned to have this job, he is grateful for the path life has given him.