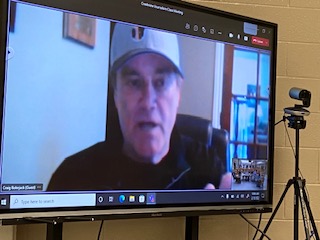 The voice of the Utah Jazz basketball team might sound familiar to college fans tuning in to watch the games for their March Madness brackets.

Craig Bolerjack has been calling games for the NCAA basketball tournaments since 2000. He has faced many challenges throughout his career, one of them being learning how to equally report on both teams during a game.

“You have to play to [the losing team’s] audience as well, because the last thing you want is to overplay the [winning team],” Bolerjack said.

Writing is an integral part of his job. He spends many hours writing post-game articles reporting the outcomes of approximately 100 games he calls a year. He has been the voice of the Utah Jazz since 2005.  After seventeen years with the Jazz, Bolerjack is closing in on 1500 NBA career games.

“I think the creativity is where the challenge is every day because you want something fresh,” Bolerjack said.

His love for writing stems from an injury in college that caused him to have two knee surgeries when he was 19. Bolerjack still wanted to be involved in sports, so he decided to take an elective class in sports broadcasting, and he loved it.

“I know it’s a cliché, but it was what I needed. It was like the lights went on,” Bolerjack said.

Bolerjack has seen many different sides to the same game, once a player and now a broadcaster. He has a whole other level of experience in his job. Knowing what a player’s mindset is on the field allows him to better report on the game.

“You just never know what direction or what journey like will take you, and I’m glad it took me in this direction ‘cause it’s been an incredible experience, and I wouldn’t trade it for anything,” Bolerjack said.

With everything Bolerjack does, from calling games to writing sports stories, covering sports is the job he has devoted his whole life to, and he has no plans to retire anytime soon.